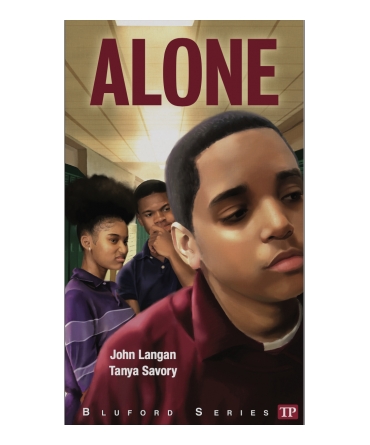 There is no refuge for fourteen-year-old Michael Tatem. A childhood injury has made him a target at Bluford High. And deeper wounds at home have left him shy, isolated, and friendless. But an unexpected connection at school gives Michael a glimpse at a new life. Can he embrace it and forge a new path for himself? Or will his attempt backfire, leaving him more vulnerable and alone than ever?

ABOUT THE BLUFORD SERIES

What is the Bluford Series? A Gateway to Reading!The Bluford Series is a collection of high-interest novels that have captivated teens nationwide. Set in fictional Bluford High, a tough but nurturing inner city high school, the novels speak to the interests, struggles, and concerns of today’s 5th–10th graders. Praised by faculty, parents, and students alike, the Bluford Series has transformed entire classrooms into reading zones. A frequent choice for school- and city-wide reading initiatives, the series has been widely reviewed in the Journal for Adolescent and Adult Literacy (JAAL) and repeatedly endorsed by the American Library Association (ALA) and the Young Adult Library Services Association (YALSA).

Key Features of the Bluford Series

Relevant topics: Topics, themes, and situations in the Bluford Series engage students’ real-life experiences. By having direct relevance to students’ lives, the books immediately hook readers.Exciting and uplifting stories: The Bluford Series celebrates teenage characters who make positive choices, especially when such actions are difficult or unpopular. Readers become emotionally engaged in each character’s struggle and often cheer in triumph when it is resolved!

Common Core Aligned: The Bluford Series features a comprehensive teacher's guide that includes a wide range of activities aligned to the Common Core State Standards.  Used together, the Bluford Series and the teacher's guide are a powerful Language Arts resource for students. Get details about the Bluford Series and the Common Core Standards. Accessible writing style: Bluford novels are written to appeal to intermediate readers. While content in the series is sophisticated enough for high-school students and beyond, the reading level for the novels is between 5th and 6th grade.Short length: Each novel in the Bluford Series contains fewer than 200 pages. This modest length encourages readers to finish their book. And once they read one, most students want to continue—a pivotal step toward becoming regular readers!Continuity and depth: While each novel stands on its own, many characters and conflicts carry over from book to book. Readers are drawn into a complex fictional world they want to explore.Broad appeal: Action, suspense, mystery, and romance fill the pages of the Bluford Series, offering something for all readers—boys and girls alike.Great price: Every novel in the Bluford Series is available at $3 each—an unbeatable value!

The first chapter of Alone will be posted here soon.

John LanganJohn Langan, president of Townsend Press, is a former reading and writing skills teacher at Atlantic Cape Community College near Atlantic City, New Jersey. In addition to writing Search for Safety, John is also the author of a popular series of college textbooks on writing and reading skills published by McGraw-Hill Book Company.  Before becoming a teacher and author, John earned advanced degrees in writing at Rutgers University and in reading at Rowan University. He also spent a year writing fiction that, he says, “is now at the back of a drawer waiting to be discovered and acclaimed posthumously.” While in school, he supported himself by working as a truck driver, machinist, battery assembler, hospital attendant, and apple packer. John now lives with his wife, Judith Nadell, near Philadelphia. In addition to his wife and Philly sports teams, his passions include reading and turning on non-readers to the pleasure and power of books. Through Townsend Press, he has developed the non-profit "Townsend Library"—a collection of new and classic stories that appeal to readers of any age.

Tanya Savory was born in Schenectady, NY in 1961, but spent the first 10 years of her life in Michigan (Kalamazoo and Ann Arbor). From there, her family moved to Columbia, SC, in 1971 when her father accepted a position teaching English at Columbia College, a small liberal arts school for women. Tanya attended the University of South Carolina and received a B.A. in English in 1983. After heading to San Francisco in 1986 to attend graduate school at San Francisco State University, Tanya became more and more involved in music and songwriting (and, to her parents' dismay, less involved in graduate school!).Taking what would turn out to be a 15-year break from graduate studies, Tanya moved to Nashville, TN, in 1991 to pursue her songwriting. In 1993, she recorded a self-produced CD of original music. This CD brought her songs to the attention of Rounder Records, who signed Tanya in 1997 and released two more CDs of Tanya's music in '99 and 2001. After touring and playing venues nationally for almost 10 years, Tanya returned to graduate school to finish her M.A. in English and writing. In 2007, she began writing full time for Townsend Press. In addition to writing and music, Tanya enjoys traveling and blogging and running. To date, she has run 14 marathons in 8 different states.