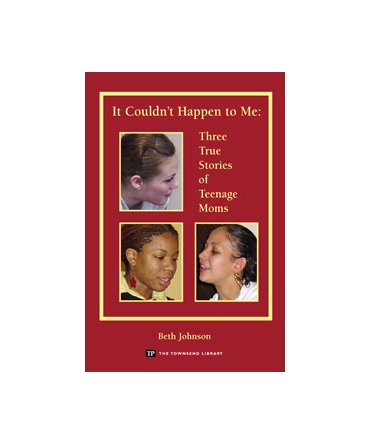 Read the first chapter of It Couldn't Happen to Me: Three True Stories of Teenage Moms.

Johanna, Rasheedah, and Rachel: each became an unmarried mother while she was still in her teens.  With the birth of her baby, each girl’s “ordinary" teen life was over.

Johanna’s boyfriend acted happy when he heard she was pregnant.  But as her pregnancy progressed, she saw less and less of him.  Soon after the baby’s birth, he went to jail.  How would she support a baby without even a high school degree?

After Rasheedah’s baby was born, all she could do was cry.  She didn’t know anything about babies.  She didn’t even dare touch this screaming, demanding stranger.  Her depression grew as her dreams of college vanished into thin air.

Rachel wanted to be popular.  Boys liked her.  But she also wanted to save her reputation.  When she discovered she was pregnant, she told a lie—one that would haunt her until her daughter was born.

Johanna, Rasheedah, and Rachel are three of today’s teen moms.  They have offered to share their stories so that other young girls won’t make the mistake of thinking, “It couldn’t happen to me."